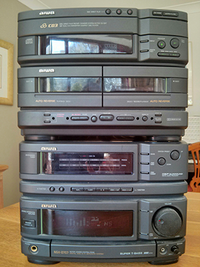 The fault symptoms on this Hi-Fi system were no operation from the tape deck, the door release mechanism was not operating and there was no playback functionality. The CD player was reading the disc indexing but audio playback from the CD player was constantly stuttering. These are relatively common fault symptoms on older audio systems so the general repair procedure may assist if you find a Hi-Fi system with similar problems.

Disclaimer: Any persons attempting to reproduce the acts represented in this article or any other repair information/article on the Repair Cafe Wiki site, either wholly or in part must be aware that they do so at their own risk. Neither the Author/s or contributing Repair Cafes accept liability or responsibility for any loss, damage, injury or any other unexpected consequences as a result of any attempt to replicate the actions in any article.

Inspection showed that the two of the square section drive belts on the cassette deck had degraded, stretching and losing their elasticity. The older the belt/s are the more 'gooey' they tend to become! There was nothing obviously amiss with the CD mechanism but when shining a torch at the lens of the laser mechanism it was covered in a fine layer of dust.

Warning - Always avoid any possibility of looking at the laser if the device is powered up at any point - see Comment section below.

Firstly discs were removed from the player and the CD tray draw left open. The unit was disconnected from the mains supply and the self tapping screws removed that secured the top cover to the CD player and Cassette deck half of the two part system. 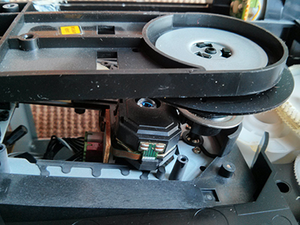 On the opposite side to that shown in the picture is the laser tracking gear mechanism. The gears were gently rotated manually to see if the laser was moving smoothly and freely, some unevenness was felt so a very small amount of additional plastic gear grease was applied to the exposed gear teeth on the laser track 'black' gear - but not to the metal guide runner.

To gain full access to the rear of the cassette mechanism it was necessary to disconnect and remove the CD player mechanism. This was done by firstly removing the front trim on the CD draw. There were 3 plastic clips, see picture below that needed to be released and the trim rotated upwards to unlatch it from the main tray. Viewing the underside of the tray whilst trying to unlatch the clips helped ease this process. 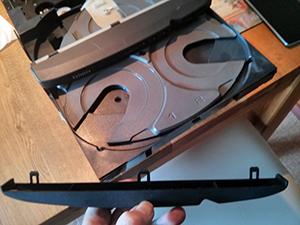 Two countersunk crosshead screws (one each side) secured the CD transport section to the front chassis, these were removed and both the 'push fit' ribbon cable and wired header plug disconnected from the lower printed circuit board. The header plug was quite a tight fit and needed the assistance of a small flat bladed screwdriver. The central middle bottom self tapping screw was removed from the rear panel. With the screws and cables remove it was possible to lift the rear panel to separate it from the lower chassis by pulling the CD transport backwards and away from the front panel. 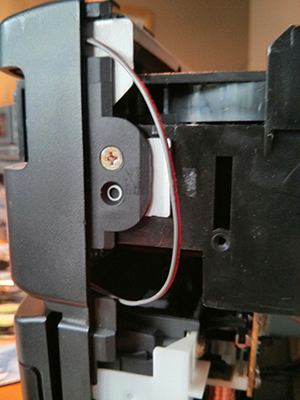 The main long horizontal mechanism drive belt was in good condition and was left in place, but the two smaller diagonal drive belts needed changing.

Note: With old drive belts it is sometime difficult to measure their size. In order to change these a pack of various belt sizes within the expected size range was ordered. These can be found for a reasonable cost on eBay.

The new belts were installed and checked to ensure that they were not twisted too loose or too tight. FRC TIP: It's worth trying not to remove good existing belts just in case you forget how they were routed! Feeding the new smaller belt across the large left pulley - seen in picture - and rotating the large pulley whilst guiding the new belt around, under (the existing belt) and across to the under side of the pulley can save removing a belt and helped on this particular unit. On many cassette decks the cassette door will not open because the belt operating the tape head mechanism has failed and the heads are still engaged with the tape. It is important not to force the door open, replace the belts first and see whether the door mechanism resets once the unit is powered up. 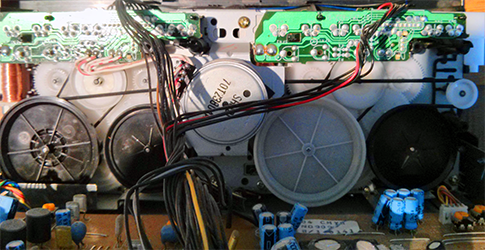 To help prevent the laser lens becoming dusty again any obvious areas of dust inside the lower chassis were removed using a vacuum cleaner.

With the unit reassembled it was given a final test. To ensure the new grease was evenly distributed on the laser gear mechanism, a long time length CD was inserted and tracks selected consecutively (up and down) to run the grease into the splines. The CD player was not quite 100% perfect and did skip very occasionally, but it was significantly improved.

When servicing Hi-Fi systems always treat CD players with great caution as they use a laser to read the disc. The beam is invisible being at an infra red wavelength, but it can still damage the retina in your eyes! Always ensure that the unit is OFF and disconnected from the mains when servicing the laser mechanism.

Also of note on this particular Hi-Fi unit, the two core mains cable had become abraded to the extent that mains conductors were exposed, this was not easy to see on first inspection. A new mains cable was installed before returning the unit to its owner, but it highlighted the importance of always checking mains plugs and cables before starting a repair!

The service manual linked to below contains details of electrical adjustments to the laser mechanism if you have access to a suitable test disc and measurement equipment.