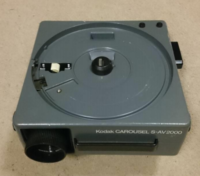 The fault symptoms on this projector were complex in as much as the mechanism would get completely confused. Sometimes it placed two slides in one carousel slot. Other times it would try and index the carousel with a slide half in and half out which would cause a jam and put lots of strain on the drive motor inside.

Disclaimer: Any persons attempting to reproduce the acts represented in this article or any other repair information/article on the Repair Cafe Wiki site, either wholly or in part must be aware that they do so at their own risk. Neither the Author/s or contributing Repair Cafes accept liability or responsibility for any loss, damage, injury or any other unexpected consequences as a result of any attempt to replicate the actions in any article.

Inspection showed a number of problems which were uncovered progressively.

Firstly the slide arm that moves the slide between carousel and projector was bent and this caused the occasional slide to jump around the side of the arm and sit half in and half out of the projector.

The arm was re-bent straight but this did not in itself cure the problem. Next it was found that the slide guide frame had become detached from the main projector frame because two 2mm peened rivets had come undone. 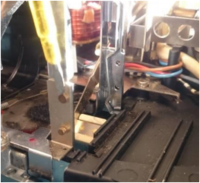 The picture shows the two peened rivets on the other side of the slide frame which are still in place, as indicated by the yellow sleeved screw driver blade. 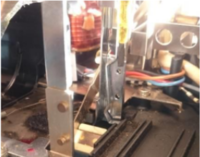 This picture shows (with the screw drive blade the two rivets which have popped out). This was difficult to fix. In the end it was decided to drill out the lower rivets and fit an M2.5 countersunk bolt and nut. The upper rivet was left in place as it carried a spring associated with the clamp mechanism. 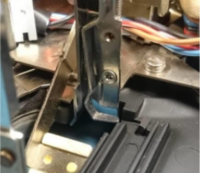 The rivet was drilled out with the slide frame in place as to disassemble the frame required a major projector strip down. A special long shaft drill was used to get into the cramped location of the slide frame. Drilling was carried out whilst a vacuum nozzle was places close to the drill bit to ensure all drill swarf was taken away and not allowed to contaminate the projector mechanism. This photo shows the M2.5 countersunk bolt has been fitted. It had to be countersunk to avoid hitting the slide frame clamp as the slide was dropped into place. 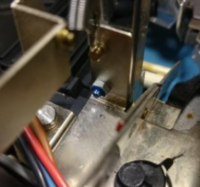 To ensure that the M2.5 nut and bolt won’t come undone Loctite 243 (blue) was used to lock the nut threads in place. This should ensure a long lasting repair but if really necessary the nut can be removed by unlocking the Loctite with a heat gun. Above the nut is the other brass peened rivet carrying the spring can be seen. Following this work the projector functioned correctly but the slide still kept catching the carousel tray and jamming.

Close inspection showed that the slides were not being lifted fully out of the projector before the carousel was indexed to the next slide. This was traced to the original slide arm which whilst having been bent straight was now not lifting the slides correctly. This was corrected by adjusting the offset cam on the slide arm (red caped screw). This adjustment was very sensitive and took several attempts to get it right.

Having completed this adjustment the projector was reassembled (for the 8th time) and all worked properly.